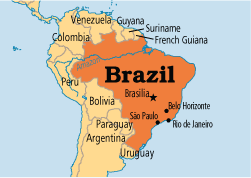 • Pray for spiritual maturity throughout the rapidly-growing evangelical church.

• Pray for the Spirit of God to transform lives within sprawling urban slums.

• Pray for missionaries to be sent to areas and roughly 130 tribes unreached by the Gospel.

Christ the Redeemer looks down with open arms on Brazil, but so many in Brazil need to look to Christ to be redeemed. Since 1931, a 120-foot-tall statue of Jesus with his arms outstretched and his head angled downward toward the city of Rio de Janeiro reminds people of both the compassion and sacrifice of Christ.

Of the 200 million people in the nation, 40 million Brazilians live below the poverty line.  While the richest 10% of Brazilians garner nearly half the income of Brazil, the poorest 10% get less than 1%. In Rio de Janeiro, where "Christ the Redeemer" stands overlooking, 20-25% of the city's population lives in slums called favelas.  Within these slums, hundreds of thousands of street children find themselves trapped in drug addiction, prostitution, and violence, and many suffer from AIDS.

In the Brazilian rain forest, an ever-shrinking population of indigenous Amerindians, numbering less than 250,000, have less opportunities to hear the gospel and know eternal life because of an increasing number of restrictions on missionaries that seek to reach them.

Despite all of these sober facts, the number of evangelical believers in Brazil continues to grow and it has become a missionary-sending nation. From high atop Corcovado mountain, "Christ the Redeemer" reminds us that Jesus continues to redeem the people of Brazil and is sending them to bring the gospel of salvation to the rest of the world.