• Pray for believers to deal biblically with extreme poverty issues and to overcome a dependence mentality.

• Pray for the occult power to be broken and made decisively subordinate to the name of Jesus.

• Pray for the indigenous church to continue to grow both in influence and as a missions-sending body.

Burkina Faso is a landlocked western African nation. Its vast savanna is vulnerable to drought, making subsistence living difficult for the majority of the population. The nation is one of the world's poorest, with almost half of the seventeen million Burkinabe below the poverty line and an unemployment rate hovering at 77%. The median age is 16.9 years, and literacy stands at an abysmal 22%, one of the lowest in the world.

Clan or lineage plays a significant role in the Burkinabe family, which is highly patriarchal. Three or four generations may share a home, and hospitality and politeness are key components of the culture. Extreme poverty has led to massive migration of workers to Cote d'Ivoire for seasonal work, where the majority convert to Islam. Approximately half the population is Muslim and the remainder is equally divided among Christians and ethnic religions. Unfortunately, each of these groups is also deeply involved in the occult.  There is great need for leadership, mentoring, financial support, and a willingness to evangelize the unreached.

The church is growing, and indigenous missions are finding success. As these groups set an example of unity, many will be drawn to faith.

The Lutheran Church—Missouri Synod has supported Lutheran congregations in Burkina Faso and theological education for their leaders since 2000. Missionaries living and serving in Dapaong, Togo, have taught at the Lutheran Center for Theological Studies, which trains students from Burkina Faso and other French-speaking West African countries. 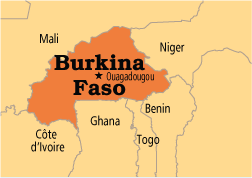 Learn about the LCMS missionaries and the work of the LCMS