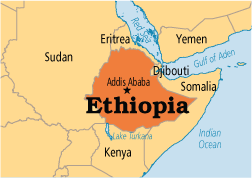 • Pray for a resurgence of the deep Christian beliefs held by this nation from the earliest Church history.
• Pray for militant Muslims to know the truth of Jesus Christ and to stop persecuting believers.
• Pray for supporting programs to not cause diminished work ethic among Ethiopians.
• Pray for the LCMS missionaries at work in Ethiopia.

As the oldest independent nation in Africa and one of the oldest in the world, Ethiopia has developed a rich and distinct cultural heritage.  Known as Abyssinia until the 20th century, the nation was ruled by an age-old monarchy.  Ethiopian coffee, enjoyed throughout the world, is the nation’s main export.

Agriculture has been the foundation of the Ethiopian economy for centuries, but years of over-cultivation and unreliable weather caused frequent droughts, famines, and eventually civil unrest.  As a result, a Marxist junta overthrew the long running monarchy in 1974.  Many of the same problems brought an end to the junta in 1991 and led to the establishment of a democratic government. Though now considered one of Africa’s most stable nations, the previous troubled years have also left Ethiopia one of the poorest.  Many of its people are starving, and two-thirds are illiterate.

Christianity has a long history in Ethiopia.  Since its introduction in the fourth century and the establishment of the Ethiopian Orthodox Church in 1270, Christianity has been a part of everyday life in Ethiopia.  Persecution during the Marxist junta was severe but brought many to Christ. Evangelicals increased significantly and are still active in ministry under the current freedoms. Approximately sixty percent of Ethiopians consider themselves Christians.  Frequently existing in peace among the Christians is a strong Muslim influence (34%), but some Islamic groups are threatening that fragile peace. Christian churches in Ethiopia have recognized the need to work together to strengthen believers and to find ways to minister to the poor.

The Lutheran Church—Missouri Synod has supported work in Ethiopia since the year 2000. Today, LCMS efforts in Ethiopia are focused on pastoral formation at the seminary of the Ethiopian Evangelical Church of Mekane Yesus through residential missionary professors and grants to their Mekane Yesus Seminary in Addis Ababa. The LCMS also works with the Ethiopian Evangelical Lutheran Church in support of pastoral formation and church worker development and care. (Source: LCMS.org)

Serving the Lord in Ethiopia

Please pray for Mark, Stefanie and their children as they serve in Ethiopia. Pray God gives their entire family strength and peace as they transition back to overseas mission work, learning the culture and the language. Pray also for their continued health and safety. Ask God to be with Stefanie and the children as she homeschools them. Please pray for the church in Ethiopia and for the faculty, staff and students at Mekane Yesus Seminary. Ask God to give Mark His wisdom and guidance as he teaches these students and helps them prepare to become faithful Lutheran pastors, lay evangelists and other professional church workers. Please also pray the hearts of people here in the United States are moved to pray for and to financially support the Rabes so they can “go with” this family on their journey of faith. Let us give thanks to God that Mark, Stefanie and their family have answered the call to serve His people in Ethiopia.

Learn about the work of the LCMS in Ethiopia.