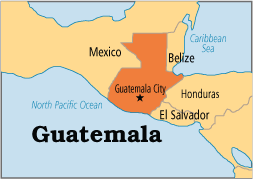 • Pray for the church to commit herself to true discipleship rooted in the truths of the Bible.

• Pray for a rapid decline in violence and the alarmingly high murder rate.

• Pray for compassion to be lavished on numbers of children at risk in the streets of Guatemala.

Nestled in the heart of Central America, just south of Mexico, is the country of Guatemala.  Its varied landscapes and climates as well as the many Mayan ruins scattered throughout the country attract visitors every year.  Over half of the population of Guatemala is descended from the Mayan civilization and they speak 22 Mayan-based indigenous languages. Spain's conquest of Guatemala in 1532 introduced the Spanish language and culture, which is reflected in Guatemala's culture today.

Guatemala's beautiful countryside belies a troubled political past. In 1996, the government signed a peace treaty ending a civil war that had been raging for 36 years. The end of the war signaled progress for the nation, but the effects of the war are still felt.  Gang and organized crime violence and drug trafficking test the government and police control.  Economically, more than half the population is living in poverty and over 40 percent of the children under the age of five are malnourished.  Guatemala's profitable production of coffee, sugar, and bananas for export has contributed to less production of grains, which have to be imported for food.

Catholicism, introduced by the Spanish and syncretized with Mayan religions, controls most religious life in Guatemala. Early in the twentieth century, Protestant churches started to make an impact, and the evangelical church has been growing in influence since the 1960's.   Even though there has been a revival of the Mayan culture and its religious rituals, there is a rise in church planting among indigenous groups.   Bible translations have aided this, and all tribes in Guatemala have been reached with the Gospel.

The Lutheran Church—Missouri Synod began work in Guatemala in 1947. LCMS work focused on the areas of seminary education, evangelism and leadership training. In the past, long-term missionaries taught at Christian schools.

In 1976, the LCMS began supporting mercy work in Guatemala with grants for housing, agricultural development and consultation, paramedic training, and building/ recon-structing mission properties. Most recently, a grant provided food and roofing materials for Guatemalans affected by a tornado.

The Lutheran Church of Guatemala is focused on training leaders, Bible translation and literacy work. Additional emphases include media broadcasting over six radio stations and one television station. Every month, more than 300 people respond to radio and television ministries and more than 300 are enrolled in Bible correspondence courses.

The Lutheran Church of Guatemala is a sister/partner church of the LCMS.

Learn about the work of the LCMS in Guatemala.