• Pray for the Good News of Jesus Christ to reach every village and town.

• Pray for the cultural barriers of the caste system and Hinduism to be overcome by the Gospel.

• Pray for justice and hope in a nation plagued by oppression, poverty, and disease.

• Pray for continued work and opportunities for the LCMS in India.

India captivates and overwhelms the senses of all who visit with its vibrant colors, immense crowds, and overpowering smells. One of the largest and most diverse countries in the world, India is filled with more than 2,500 distinct people groups who speak over 456 languages. A staggering one billion people are dispersed over one million square miles.

There is more human need in India than in any other country. Approximately 191 million people, 15% of the population, are malnourished. Roughly 50,000 children in India are orphans, and about 22% of the population lives in poverty. The caste system, a once rigid cultural institution that assigned people to a social stratum based on birth, led to many horrific human rights abuses. Though officially abolished, it continues to hold great influence over the culture and remains a major bar to social mobility.

One of the least reached countries on earth, 95% of Indians have never heard of Jesus! While Hinduism is practiced by about 74%, only about 2 - 5% identify as Christians. But because of the sheer size of the population, even minorities (Buddhists, Jains, and Sikhs) number in the millions each. The Muslim minority is so large that within decades it is predicted that India will be the world’s largest Muslim nation. The legacies of Christian workers like William Carey and Mother Teresa have left a mark on this nation. Yet Christianity is still often seen as a threat to the traditional Hindu way of life. Anti-conversion laws make it difficult to share the Gospel. Those who choose to follow Jesus are often threatened with losing their status, jobs, homes, and even lives. Many Christian organizations have been forced out, However, despite the intense persecution, Christianity is the fastest growing religion in India.  Sources: (OperationWorld.org and PrayerCast.com)

Today, the IELC is blessed with 764 congregations, 114,600 baptized members, approximately 65,000 communicant members and 120 active pastors, along with more than 80 schools and three hospitals. It also has institutions for the deaf, blind and those who are mentally and physically disabled. Source: (LCMS.org) 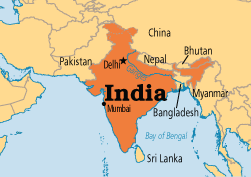 Serving the Lord in South Asia

Rev. Dr. Edward and Monica Naumann serve the Lord through The Lutheran Church—Missouri Synod (LCMS) as missionaries in South Asia. In his role as a theological educator, Edward works with local church leaders to train and form new pastors, to provide opportunities for ongoing theological education and to produce Christian educational publications. Through the relationships formed, Edward and Monica share the Gospel with the people in the communities in which they serve and live

Pray for the Naumanns as they live and work in South Asia and continue to learn the new culture and language. Pray for God’s provision of a good education for their children. Pray that the Word of God bears abundant fruit as Edward proclaims it through his teaching and the publications he works on. Let us give thanks to God that this family is serving His children in this part of the world.

Learn about the LCMS missionaries and the work of the LCMS in India.