• Pray for LCMS missionaries in their leadership of training church workers. • Pray for the workings of the Holy Spirit throughout the land; growing faith and countering nominalism. • Pray for families affected by politically- induced violence. Country Situation:

Kenya has been described as having a little bit of all of Africa in one country.  Fertile plateaus, mountains, deserts, rain forests, and beaches along the Indian Ocean form the varied landscape of Africa's eighth largest country. Over forty different ethnic groups, including Africa's three major socio-linguistic groups, the Bantu, Nilotic, and Cushitic, combine to give Kenya a diverse population and rich culture.

Once a British colony, Kenya received its independence in 1963. Almost eighty percent of Kenya's population lives in rural areas where their income is dependent on agriculture. Environmental problems, high birth rates, corruption, unemployment, and 1.5 million living with HIV/AIDS have resulted in half of the 41 million Kenyans living in poverty.

In a country where nearly fifty percent of the population considers themselves to be evangelical, it is not surprising that many Kenyan Christians are engaged in church planting and sending missionaries to other countries. The number of new churches and growth in established churches can be found in all denominations, and eighty-three percent of Kenyans are now estimated to be Christian. Churches are being challenged by nominal-ism, ethnic cultural practices mixed with biblical truths, and the need for trained leaders in the 80,000 congregations.  Islam and traditional tribal religions comprise most of the other seventeen percent of the population.

The Lutheran Church—Missouri Synod began work in Kenya in 1998 as part of a larger East Africa strategy for training leaders among several people groups. Because the Lutheran church was growing at such a large rate, many churches were being planted that had no pastor. A great need exists to train lay leaders who can minister to the large numbers of people who are newly-baptized and to travel to many other villages that have asked to hear the Gospel. Therefore, the main thrust of LCMS work has been to support local Mission Training Centers, where eight to 12 laymen meet several days monthly to receive biblical and doctrinal training from national Lutheran pastors. Currently, there are 18 training centers throughout Kenya. The strategy is to make these training centers self-sustaining so they can continue their work without mission support. 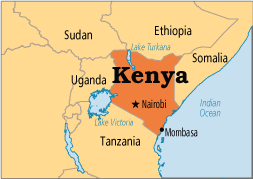 Serving the Lord in Kenya

John and Jenn Wolf serve the Lord as missionaries through The Lutheran Church—Missouri Synod (LCMS) in Kenya. As the Africa region’s project manager, John provides oversight and support for projects and grants across the region, with a particular focus on mercy work. He also trains the local people and the local church partners to develop, manage and sustain projects that support Christian growth and congregational needs across Africa.

Pray for the Wolfs as they serve in Kenya. Ask God to give them strength and wisdom in their mission work overseas. Pray for John as he supports the needs of the African people. Pray also for Jenn and the children as they build relationships with those in their community. Pray for the people in Africa that they are brought to a saving knowledge of Christ and are assisted in their vocations through the work of LCMS’ African missionaries.

Learn about the LCMS missionaries and the work of the LCMS in Kenya.