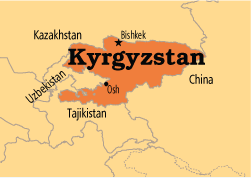 • Pray for people to find true hope in Jesus rather than from a secular government.

• Pray for the small Church to mature in faith and stand strong against evil.

• Pray for courage for cultural Muslims who are open to Jesus but frightened by potential persecution.

Kyrgyzstan is nestled in the Tien Shan mountain range of Central Asia, bordered by China, Kazakhstan, Tajikistan, and Uzbekistan. This is a nation of ragged and wild mountainscapes, nomadic traditions, and unique yurts that many shepherds call home. The country also boasts great ethnic diversity, including Turkics, Europeans, and East Asians. Yet its agricultural economy is stymied by its mountainous, landlocked location.

Kyrgyzstan gained independence from the USSR in 1991. Deep ethnic, political, and communal divisions have led to instability and violence. Corruption, ethnic divisions, border security concerns, and the threat of terrorism continue to inhibit positive and lasting change. High unemployment and widespread poverty have forced hundreds of thousands to seek work in Russia and Kazakhstan. Many rural citizens have moved to Kyrgyzstan's cities in search of better economic opportunities, which has created a growing population of slum-dwellers. High rates of alcoholism, drug trafficking, gambling, and prostitution have only magnified the nation’s suffering.

A primarily Muslim nation (89%), Kyrgyzstan’s cultural identity is tightly associated with its Islamic faith. Yet many continue to practice ancestor worship. The Occult, demonic forces, and shamans also hold many in further bondage. Christianity is claimed by only about 5%, the majority being Orthodox. Though the Church in Kyrgyzstan was once primarily expatriate, today Kyrgyz believers make up a significant portion! The Christian faith saw great growth after Communism. And although this growth has slowed, the Church is maturing. Hundreds of Protestant congregations now exist, as well as many unregistered house churches. Kyrgyz Muslims are often resistant to the Gospel, even intimidating believers through property destruction and physical violence. But the prevalent needs of the poor, disabled, and elderly provide an open door for the Body of Christ to manifest the love of Jesus to "the least of these.”

The church in Kyrgyzstan includes 35 groups and congregations, more than 600 confirmed members, six ordained pastors, three student/preachers and 11 evangelists. The Lutheran Church Concordia is active in its witness and service in Kyrgyzstan, as it seeks through its numerous ministries to serve others and to proclaim Christ’s love.

Learn about the LCMS missionaries and the work of the LCMS in Kyrgyzstan.