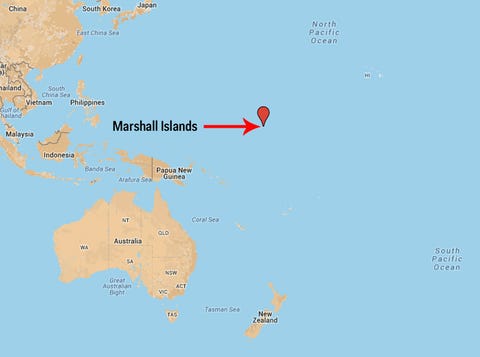 • Pray for protection from cults and false religions attempting to deceive the unaware.

• Pray for those whose lives have been devastated by the effects of nuclear testing to learn the freedom of Godly forgiveness.

Roughly half way between Hawaii and Australia lies a chain of 1,156 Pacific islands dispersed across nearly two million square miles. With astonishing coral atolls and vibrantly blue water, the Marshall Islands are a breathtaking part of God's creation. Yet, their history bitterly contradicts the appearance of paradise, as war and occupation have often plagued the islands. Following World War II, the United States was drawn to these isolated islands as a testing ground for nuclear bombs. To this day, the Marshall Islands suffer from the many consequences of nuclear testing, such as high rates of genetic disorders and cancer.

The islands were occupied by the United States for several decades after World War II. Today the Marshall Islands is a sovereign nation under a Compact of Free Association with the U.S. With America responsible for the security and defense of the islands, roughly 61% of the island's annual budget comes from U.S. aid. Unemployment and urbanization are very high.

Marshall Islanders are overwhelmingly people of faith, with 97% claiming Christianity. Within that Christian population the majority are Protestant, and half of those are Evangelical. The Church has enormous influence in every area of society, but many believers have little discipleship and are easily led astray by false teaching. Mormons, Jehovah's Witnesses, and Baha'is are actively spreading their faith throughout the islands. Godly church leadership is needed to rightly shepherd the flock, providing the Church a firm Biblical foundation.

Currently, no LCMS missionaries reside in this country. To search for missionaries serving in this region in other countries, please visit the missionary search database. To learn more about the LCMS global mission team, visit lcms.org/missionaries.