• Ministry support of the LCMS to the Lutheran Church of Panama, helping to develop pastoral and lay leadership.

• A strong Christian impact on the multitudes of nationalities passing through the Canal Zone.

• Develop Panama into a sending nation overcoming lack of vision, unity and training obstacles in the churches.

Situated between Costa Rica and Colombia, Panama serves as the land bridge between North and South America. Flanked by the Caribbean Sea and the Pacific Ocean, the narrow land has long been marked by trade routes to move goods from one ocean to the other. During the Spanish Colonial period, the route became known as the Camino Real (Royal Road), and much gold and silver made its way across the isthmus before departing for Spain. Having endured nearly three centuries of Spanish rule, followed by dictators, Panama has more recently enjoyed relative peace and democratic rule.

Panama exists as a bridge -- both geographically and ethnically. An ethnically diverse nation, With Mestizos, Caribbeans, Panamanian Caucasians, Amerindians, and other immigrants from around the world, Panama represents a diverse cross-section of the world’s population while maintaining a strong, nationalistic identity.

Of Panama’s 3.2 million inhabitants, over 90% claim Christianity. Most of these are Catholic, though Evangelicals have grown from 5% of the population in 1970 to nearly 20% in 2010. All but two languages have Bible translations, and Panama is now sending missionaries to other nations. Despite the Christian majority, the local churches lack vision and unity, while widespread nominalism skims effectiveness. While Amerindians have responded positively to the Gospel message, morality problems plague Panama, including divorce, illegitimate children, domestic violence, immorality, and drug use. Sources: (OperationWorld.org and PrayerCast.com)

The Lutheran Church—Missouri Synod began work in Panama among the English-speaking community in 1941 and among the Spanish-speaking populace in 1980.

The LCMS began supporting mercy ministry in Panama in 1988 with a grant for emergency food assistance.

The LCMS provides support to ministry in Panama carried out by the Lutheran Church of Panama. Together, they develop pastoral and lay leadership through the theological education by extension program and focus on diaconal ministry (mercy ministry).

The Evangelical Lutheran Church of Panama has grown to a baptized membership of more than 200 people in six congregations and preaching stations. The church operates three preschools and three kindergartens. 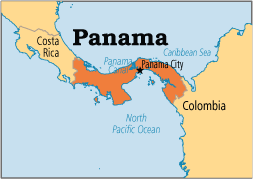 Rev. Arthur and Deaconess Eva Rickman serve the Lord through The Lutheran Church—Missouri Synod (LCMS) as missionaries in Latin America, based in Panama. Arthur serves as an area facilitator in the region (Colombia, Cuba, Mexico and Panama), building and strengthening relationships with LCMS partners. In addition, Arthur helps administrate theological education opportunities and manage diaconal work throughout the area in which he serves. He also serves the local church in Panama in various ways.

Serving as a deaconess, Eva assists with deaconess formation. Additionally, she encourages and supports the mercy work that is happening throughout this region.

Learn about the LCMS missionaries and the work of the LCMS in Panama.