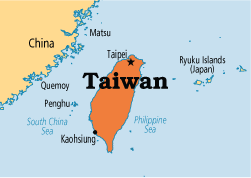 • Pray for many more missionaries to share the Good News of Jesus in this politically open land.

• Pray for the chains of idol worship, superstition, and false religion to be broken by the power of Jesus.

• Pray for the Gospel to infiltrate and transform the working class that is less than .5% Christian.

• Pray for the LCMS missionaries in Taiwan.

The Republic of China, commonly known as Taiwan, is an island of 24 million people about 160 km off the coast of China. When the Chinese Nationalist Party (KMT) lost mainland China to the Communist Party of China in the Chinese Civil War following World War II, its government relocated to Taiwan.

While the government of Taiwan has been democratized over the years, the possibility of Taiwan becoming a truly separate state from China has heightened mainland Chinese military and diplomatic pressure on the islanders.

Taiwan is a secular state with freedom of religion. The majority of the population follows a unique blend of Buddhism, Taoism and Confucianism. Christian growth has been slow, with an estimated 6% of the islander claiming to follow Christ. Prayer is needed to address nominalism and the great need for more pastors and Bible teachers, including adequate giving levels within the church to support them.

In 1992, the CELC generated support for the establishment of China Lutheran Seminary (CLS) in Hsinchu, Taiwan, which serves as a joint seminary for six Chinese Lutheran bodies and is supported by six Lutheran mission agencies.

Serving the Lord in Taiwan and the Asia Region

Rev. Stephen and Maggie Oliver serve the Lord through The Lutheran Church—Missouri Synod (LCMS) in the Asia region, based in Taiwan. As a theological educator, Stephen teaches the New Testament at China Lutheran Seminary in Hsinchu, Taiwan.

Born in Memphis, Tenn., Stephen grew up in Japan and in the southern and western parts of the United States. He graduated from Concordia University, Portland, Ore., and from Concordia Seminary, St. Louis. Stephen then served as pastor at Holy Cross Lutheran Church in Carlisle, Iowa. He enjoys traveling, history and camping.

Maggie and Stephen met in Taiwan. Maggie earned a master’s degree in counseling from China Lutheran Seminary in 2006. Stephen and Maggie have three beautiful children.

“My main prayer request,” Stephen writes, “is that I would learn the Bible and Chinese well with a heart that is pleasing to the Lord (1 Cor. 13:1). I pray that God will give me His love for Chinese people so that through this ministry, the Spirit will work fruitfully in many people’s lives.” Let us give thanks that the Oliver family is serving God’s children in this part of the world.

Learn about the LCMS missionaries and the work of the LCMS in Taiwan.