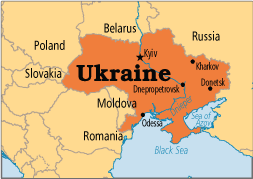 • Pray for God's peace and reconciliation to overcome all hatred, conflict, and war.

• Pray for followers of Jesus to arise as messengers of His hope to the hopeless and the oppressed.

• Pray for repentance, forgiveness, and unity in the Church, across denominations and traditions.

Once one of the Soviet Union’s most fertile republics, Ukraine was a major producer of Europe’s wheat and a primary source of minerals such as coal and iron. The country’s rich, black soil generated more than 25% of the Soviet’s agricultural output. Since gaining its independence in 1991, the nation has struggled to take advantage of its economic potential and remains largely dependent on Russia for oil and gas. And while Ukraine has become a mixture of ethnicities, traditions, and customs, Ukrainians continue to be a very hospitable people.

During the seventy-one years of Soviet rule, Ukraine endured engineered famines in which an estimated eight million died. The government strictly limited attempts to develop Ukrainian culture, even forbidding the study and use of the Ukrainian language. In addition, the population suffers greatly from HIV/AIDS and alcoholism. Rampant drugs, crime, and prostitution enslave many of Ukraine’s most vulnerable, including orphans.

As the "Bible Belt" of the former Soviet world, the Ukrainian Church has faced a long history of persecution. Though freedom of religion is improving, it is not yet protected in both law and practice. Leadership training and direction are greatly needed among Christians, especially with the rapid growth of thousands of new congregations since 1991. Doctrinal schisms in the Orthodox church and divisions between Catholic and Protestant believers hinder their witness. The pain suffered under Soviet rule and during the most recent conflicts has greatly divided the Ukrainian people. But even amid recent violence, the Church has responded as the hands and feet of Jesus, meeting physical and spiritual needs. This has provided increased opportunities for Ukrainians to know and follow Christ.

For more information on activities in Ukraine click Here.